Jill Solloway, The Goddess, and Me

“Thank you, Goddess.” That’s not something you hear said a lot out in the mainstream, especially on national television. But when Jill Solloway, the creator of the show Transparent, got onstage to accept the Emmy for Outstanding Directing for a Comedy Series last week, those were the first words out of her mouth.

“Thank you, Goddess,” Solloway said again. I held my breath. What would everyone’s reaction be?

I discovered “The Goddess” about twelve years ago in an all women’s movement class. My friend who had recommended the class didn’t mention that it was a Goddess circle. If she had, I’m not sure I would have gone.

Growing up Catholic and Filipina, I was taught to believe that there was just the one God. He was a White guy in a long gown. He had shaggy hair and a beard.

The only reason I even signed up for the class was because my friend had told me that because of this particular movement practice her days had turned orgasmic. Orgasmic? What did she even mean? Was she walking around having orgasms all day? Did she have orgasms even when she was stuck in traffic? Was she having an orgasm right now? Surely she was being metaphorical. Either way, I thought, I’ve got to have me some of that.

That first night, it became clear that this wasn’t a class about orgasms. Instead, something else happened.

As I moved in my body and witnessed other women do the same, I felt the presence of God in the room. Only, he wasn’t a man, she was a woman. And her name was Goddess.

That my God might actually be female and not male should have come as a huge shock except that it made absolute sense—and not just in my head but in every cell of my being. No wonder I’d never quite resonated with the God I grew up with—like a relative you have nothing in common except for your bloodline.

That God was this male figure up there, remote and outside of me. With the Goddess, I didn’t need to wait to get to heaven to find out if she was real. I could see her everywhere in the flesh now, as the Earth (Mother). I could feel her in my body, moving through me as feminine energy. By recognizing that the Holy could also be female, I was able to see that women, and not just men, are sacred too.

Even though my spiritual conversion from God to Goddess was instant, this wasn’t news I was dying to advertise outside my circle of close friends and family. What if people think I’m too “out there” spiritually and stop wanting to know me? What if I’m blackballed by the journalism industry, the acting industry, any industry? Worse yet, what if I don’t get a date with a guy ever again?

My fears about what could happen if I were to publicly admit that I am a woman who worships the Goddess may be particular to me, but they do not exist in a vacuum. I spoke with Tabby Biddle, women’s rights advocate and author of Find Your Voice: A Woman’s Call to Action. She said:

“Over the years women have been persecuted for speaking their truth and being ‘different’ than men. Women have been burned at the stake. Stoned to death. Raped and murdered. While witch burnings don’t happen today, stonings do, and so do rape and death threats. The Goddess presents a shift in orientation from the male culture that we all have grown up in. This direct challenge to the patriarchal status quo is a game changer. It is scary for a woman to say, ‘I stand for and with the Goddess.’ She temporarily has to re-live the barbaric acts taken against women over the centuries since the onset of patriarchy. The memories of these acts live in her body. In her blood. In our collective consciousness. Who will support me? Will history repeat itself? These fears are real.”

Which is why I reacted the way I did when I heard Solloway mention the Goddess in her speech. What is going to happen to her?

In many parts of the world, including certain communities in the United States, to acknowledge the existence of a female God is still forbidden.

The day after the Emmys, New York Magazine listed Solloway’s thanking of the Goddess as one of the feminist highlights of the event. Twitter and the media mostly lauded Solloway for her creative work and continued advocacy for transgender equality. As Biddle noted, “I think there is more of an open-mindedness to the term [Goddess] now that women’s equality and ending gender discrimination are more at the forefront of the cultural conversation.”

Here, on Stories from the Belly, I’ve alluded to the Goddess—written about her even (or, rather, written around my relationship with her). But to admit outright that the Goddess is the one to whom I pray, the one I sit before at my altar, feels like I’m risking a lot.

Hearing Solloway publicly acknowledge the Goddess makes me want to take that risk.

The Goddess of Enough

With anything that’s alive and constantly evolving in the moment, it’s time to honor the need for this particular “belly” to expand by making make room for other kinds of stories I’d like to tell as well.

I love writing about women’s bodies and sharing my experiences of reclaiming my womanhood from the patriarchy—and there will be more stories about the feminine to come. But focusing just on the reclamation part of my voyage has started to feel like putting on a favorite pair of jeans that have become a little tight.

Growth is always a good sign, especially when there is the need to stretch old boundaries, including the self-imposed kind. Still, this is the type of unfurling that makes me feel scared and excited and vulnerable at the same time.

The deep-seated fear that comes up for me is: Am I enough? As in, in this case, if I change and start to deviate from what people have gotten used to expecting from me here, will I—just me—be enough for you, my blogging community, to keep coming back for more? There’s only one way to find out.

The other day, my friend Maria Badiei, who is both an artist and healer, gifted me with a painting she’d made several years ago. We call this artwork of hers “The Goddess of Enough.” 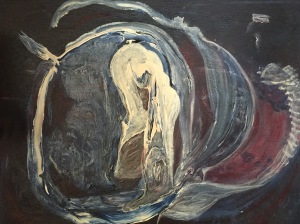 “The Goddess of Enough” by Maria Badiei

The female figure in the center looks very much like what I once imagined how a deity with that name might look. At the time, I desperately needed the reminder that no matter what happens or doesn’t happen in life, I, Diahann Reyes, am enough— as opposed to my lifelong, polar opposite worries of either being  “too much” or “not enough.” Both tend to stop me dead in my tracks.

I thought the Goddess of Enough only lived in my imagination until I saw Maria’s work and realized that she has seen her, too. The painting now hangs in my living room. To me, this image shows a woman birthing all sorts of possibilities in her life because she knows her own enoughness.

So stay tuned for changes on this blog, which may happen sporadically or in waves—not unlike contractions—as Stories from the Belly slowly morphs into its next becoming.