← Mirror, Mirror on The Wall
Saturating in Feminine Beauty →

A Finger Without A Ring On It

An ad for the upcoming Bravo series Girlfriends’ Guide to Divorce was recently banned from subways and city buses in Los Angeles and New York because the content was deemed “inappropriate.” In the poster, star Lisa Edelstein is shown smiling while giving the camera her ring finger (as opposed to her middle finger).

There is a faded tan line on that finger, right where her character’s wedding ring used to be. The tag line accompanying the photo is “Go Find Yourself.”

I like the ad, which caused me to do a double take the first time I saw it. Is that an F-off gesture? I wondered, before realizing that it was the ring finger and not the middle one that Edelstein was raising.

The comedy is based on the popular Girlfriends’ Guide series by Vicki Lovine. Considering that it chronicles the life of a fortysomething woman who finds herself single again—probably at a time in her life when she least expected it—the ad makes perfect, tongue-in-cheek sense to me. Sometimes in life, you really do have to just say, Go F-(ind) yourself.

But the Metropolitan Transit Authority in New York City and Metro Los Angeles, as well as certain mall owners in L.A., think the ad is too offensive to display. Yet this ad, unlike others, doesn’t contain the kinds of gratuitous nudity or violence that get past the censors all the time. In an interview with Fox411, Katie Yoder of the politically conservative Media Research Center (MRC) Culture said that the show’s promo “trivializes marriage while serving as an ad for divorce.”

What, exactly, is so offensive about an ad that depicts a woman choosing to approach life in an empowered way, even when faced with an event as devastating as the end of her marriage? That is not the same as minimizing the institution or encouraging women to get a divorce. Considering that quite a number of marriages end in divorce or separation, why not allude to the possibility of a hopeful, happy future instead of a bleak one? Fortunately, not everyone agrees with the ban. The ad has found placements on other sites in both cities, including this one: 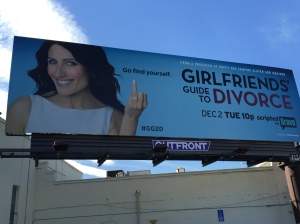 I ended a long-term relationship nearly six years ago at age 38, walking out of our home together and starting all over. Even though everyone tells you that living together is not the same as being married to someone, there was still a lot of loss and grief (along with relief) that came with the separation. I loved him. And if I honestly thought that with hard work we could have found a way to resolve our problems and make each other happy, I would have stayed forever.

With my renewed single status I could tell that certain people felt anxious for me, especially at “my age.” Hurry up and find someone new before it’s too late! You’re getting older. That biological clock of yours will only tick for so long.

I also discovered that because I had never been married, there were people I met who considered this a liability. I was asked the question “why have you never been married” more than once in a tone that seemed to imply, what’s wrong with you that you never took the plunge? Or, was it just that no one was willing to scoop you up? There was also another kind of reaction, with some men I met expressing worry that by now I must be desperate to marry.

This may be the 21st Century, but it seems to me that the idea of a woman who is going it alone without a man, especially as she gets older—whether by choice or because that’s how her life has worked out—still makes some people nervous. I’m not talking about economically. I mean that socially and culturally.

And then there are the derogatory words used for an older woman who has never married: spinster, old maid. The word divorcée, which references a woman, used to have a negative connotation to it, too.

And sometimes, in life, whether by choice or circumstance, a woman may just have to stick her I’m single finger up again. And really, what is bad or shameful or inappropriate about that?

For me, at that time in my life, it was the best choice. Who am I? What do I really want? I’d been so busy playing the role of someone else’s other half for so long that I’d forgotten. I took the next four years to find out.

Yet that decision did not preclude me from eventually finding committed love with a partner. If anything, the kind of relationship I have with this man—made up of two healthy whole people instead of two halves trying to make a whole—is only possible because I took the time I needed to find myself again. This time around, I am determined to hold onto both of us for good.

79 Comments on “A Finger Without A Ring On It”

I want to know what you think! Cancel reply