On Witches and Superheroes

As a girl on Halloween, I always dressed up as a gypsy fortune-teller. When I grew older, I swapped out my fortune-teller costume for a black gown and a pointed hat so I could play dress-up as a witch.

On the surface the reasons were convenience and vanity. While a lot of my friends wanted to bring out their ghoulish selves for the night, I wanted to be all dolled up. Putting on bangles and dangly earrings and wearing a long flowing skirt with a scarf over my head made me feel pretty, not to mention that all I had to do was raid my mother’s jewelry box for the accessories.

Playing witch was easy enough, too. The local toy store packaged the whole outfit in a bag. The broom came from my cleaning closet. And while most portrayals of witches have them looking decrepit with deformed noses, I put on lipstick, blush, and eyeshadow like I was going out on the town.

Looking back, I realize that while most people were putting on costumes to dress up as scary creatures or famous characters, I was using the occasion to go out in public dressed up as myself.

I know. I’m not a gypsy and I don’t tell fortunes. I can’t fly on a broomstick or cast any kind of spell. Although I sure would like to—fly, that is. (Unfortunately, witches have gotten a bad, inaccurate rap that led to millions of women getting burned at the stake a few hundred years ago. For more on that go to Witch Burning = Misogyny on BroadBlogs.)

To me, the fortune-teller and the witch are archetypes of the wild woman. The untamed woman that refuses to conform to society’s restrictive ideas of how females should behave. The woman who is in touch with her inner knowing and moves to her own rhythms and saturates in her own desires. A woman who knows her own power and embraces her personal magic.

Dressing up as witch and fortune-teller allowed me to tap into my own wild woman that I wasn’t even aware existed within me.

I do now. I may not be able to see the future or boil a potion, but I do brew up stories with words. I may not have supernatural powers, but I know I have real power.

I also like to think of myself as rather witchy in an Elphaba from the Broadway musical Wicked kind of way. Her song, Defying Gravity, has become one of my anthems.

And I’d bet that there are many others who emerge on Halloween dressed up as their super alter egos.

A few days ago on Facebook, actress Alyssa Milano posted a photo from last year. In it she is breastfeeding her baby and dressed as Wonder Woman. Accompanying the image is the hashtag #normalizebreastfeeding.

Milano may be dressed up in costume, but she is a woman who has birthed and is nourishing a human life with her own body. What could be more Wonder Woman-like than that?

Happy Hallows to all!

May your witchy or superhero self come out to dance under the light of the moon tonight and every night.

**Spoiler Alert if you haven’t seen the movie yet.

I walked out of the theater after watching Magic Mike XXL with a huge smile on my face and it wasn’t just because Channing Tatum and his crew know how to dance sexy while wearing minimal clothing. Having a mainstream summer movie cater to my female gaze was a refreshing experience. But even more exciting were the other stories playing out within the subtext of this buddy road trip flick.

This time around, you learn there is more to the other guys than their hot bodies dancing for cash. Matt Bomer’s Ken is an aspiring actor and a Reiki healer. Adam Rodriguez’s Tito makes artisanal frozen yogurt and is trying to launch a successful dessert truck business. Kevin Nash’s Tarzan is some kind of artist-magician. 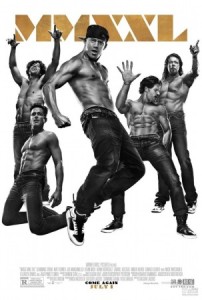 And unlike in the original film, where the guys’ stripper routines were primarily choreographed to get women to open up their wallets, Mike and his friends are focused on creating performances in which they channel their passions and embody their authentic selves. Gone are the hot fireman, sexy cop, and other characters, which allude to females wanting to be rescued, that typically populate male stripper bars and bachelorette parties. Instead, there is the gourmet dessert maker who wants to satisfy more than your sweet tooth and the hunky lover who will help you make all of your fantasies in the bedroom a reality.

These guys, led by Tatum’s Mike, are not stereotypes of the dudes you typically see in buddy bonding movies and not just because they are male entertainers. No one is trying to score the most chicks or kill anyone or rob a bank. No one is trying to out dude the others, whatever that even means. If anything, they openly support and love each other. Yet as actor Joe Manganiello, who plays Big Dick Ritchie, said in a recent interview, in Magic Mike XXL the men are very much in their masculinity and maleness.

And the women are not just accessories to the male leads. Three of the female characters, played by Jada Pinkett Smith, Andy McDowell, and Elizabeth Banks, are actresses over 40. McDowell is 57. The women they play are confident, in charge of their lives/careers, and know who they are and what they want.

Their characters have not shrunken into invisibility because they are no longer young in years. Time and experience have allowed them to evolve into the most empowered versions of themselves yet. These three are who Mike and his friends turn to for help in realizing their dreams of dancing one last time at the Myrtle Beach Stripper Convention.

END_OF_DOCUMENT_TOKEN_TO_BE_REPLACED

A Night at the Movies, Part I: Cinderella, Feminism, and Me

I grew up on fairy tales. For years I believed that I too could instantly know a guy was “the one” without getting to know him first and hoped that someone might sweep in one day and—just like that, Bibbidi-Bobbidi-Boo—my life would become what I needed it to be. Since then, I’ve (thankfully) woken up to the reality that no one—man, woman, or fairy anyone—is coming to save me. I’m the one who’s always had the power.

So when I went with a friend to see the movie Cinderella, I was absolutely expecting to hate this live version of the classic animated film. High heel glass slippers that are bad for your feet, finding true love based off several hours of eye gazing, magic-wand type solutions to hard problems, and the heroine staying stuck in a bad situation rather than taking empowered action. What could there possibly be to like?

Well, I just loved the film. I was just as enchanted by the story as I was when I saw it the first time as a girl. The special effects, including Cinderella’s worn and torn dress transforming into an exquisite ball gown as she turns around and round, made it seem as if the cartoon had come to life. It didn’t hurt that the actor playing the Prince was so easy on the eyes or that he seemed like a very good man.

Does this make me a bad feminist because I loved it? The thought, for a moment, crossed my mind. A few years back, I would have said yes and been wracked with guilt.

In her Bad Feminist manifesto, author Roxane Gay writes about how you can be a feminist and still be into things that may not exactly fall under the supposed umbrella of “feminist-like.” She gives many examples, including her desire to be both independent and taken care of or how she still enjoys rap music even though some of the lyrics are degrading to women. Still, as she points out, none of these personal preferences make her any less committed to the issues that are integral to the feminist cause.

Like Gay and other feminists, I believe that men and women are equal and should be treated as such. But that doesn’t mean there still isn’t room for me to appreciate when my boyfriend takes charge in certain situations, opt to sometimes keep my mouth shut rather than speak out, or enjoy the results that come from working out several times a week while knowing that my worth has nothing to do with the size of my waist. None of these have any bearing upon my 100% dedication to calling out misogyny when I see it and supporting other women in owning their power and loving their bodies.

Being a feminist began to feel restrictive and limiting—the opposite of liberating. And for a while, I went back into my “I’m not a Feminist” closet because I didn’t feel like I could hold on to the many contradictions that make up me and be a good feminist too.

In her manifesto, Gay also writes, “I bought into grossly inaccurate myths about who feminists are—militant, perfect in their politics and person, man-hating and humorless.” And like her, “I don’t want to buy into these myths anymore.” I have a feeling some of the myths were made up by those seeking to shut the movement down via negative spin tactics.

It wasn’t until I realized that I had been trying (and failing) to fulfill some ridiculous stereotype rather than being myself—a person who happens to believe in equality for all—that I finally became comfortable not just owning that I was a feminist but embodying that in ways that are specific to me.

Just as being myself doesn’t take anything away from feminism, being a feminist takes nothing away from me. If anything, feminism has given me more choices that allow me to be who I am in my personal life and out in the world.

As for Cinderella, I think of my appreciation for the movie as not unlike my relationship to certain foods. I know that potato chips or fried pork rinds aren’t the healthiest but that doesn’t mean I won’t indulge in them occasionally and relish every bite. (And to paraphrase Georgia Platts, the author of BroadBlogs who posted a thought-provoking comment below, not every story about a woman has to be a feminist one.)

Then again, at the end of the day, a love story that involves two people, excited to have found each other, and brave enough to make a go at creating a happy life together—what’s anti-feminist about that? Besides, I’ve always been a sucker for a happy ending.