← A Night at the Movies, Part I: Cinderella, Feminism, and Me
Baring the Female Breasts: Beyond Objectification →

Between The Period and The Final Pause

I stopped bleeding once for a year when I was thirty. I had just gotten off the pill. Not bleeding for 360-plus days worried me although I’d heard that this could be a potential side effect of getting back into rhythm with my natural cycle. After that I decided that there would be no more birth control pill taking for me ever again.

The first time I ever bled was on a January 6—Three King’s Day, which honors the three wise men who brought gifts to Jesus at the manger. I was a month shy of turning 14. I felt as if the three Kings too had brought me a gift. I’d been waiting for my first period ever since reading Are You There God? It’s Me Margaret by Judy Blume. I’d even ordered my first period starter kit in the mail in anticipation of this moment.

I was as excited to start wearing Maxi Pads and pantiliners as I’d been to try on cut-off pants two years before when Madonna debuted the look on her first album. To bleed, to me, felt like an initiation.

But as I grew older bleeding became more of an inconvenience, that time of the month when I couldn’t wear white or go swimming, when I hopefully would not have an “accident.” I’m on my period became something to say to just my closest girlfriends and certainly not in public and especially not in front of men—as if there was something dirty about bleeding. 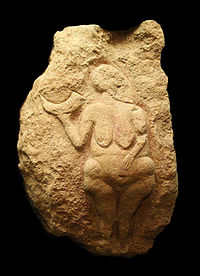 The Venus de Laussel. The 13 notches on her horn is said to represent the # of moons or menstrual cycles in a year. Wikipedia commons: http://tinyurl.com/qgwynqq

We talked about the connection and parallels between the female menstrual cycle and the moon. We deconstructed the term “premenstrual ‘syndrome’” –the latter half of the phrase bringing with it a bad wrap connotation, not unlike the way ‘bitchy’ has been dubbed upon a woman who is less willing to put up with crap during that time of the month.

And there is all this power–and not just the wondrous ability the period gives us to create a human life.

There is our heightened sensitivity and stronger hits of intuition. There are the ways in which our emotions, our truth, and our creativity are able to more easily pour out, like our blood, during those three to five days. We talked about giving ourselves permission to slow down on our periods, pay closer attention to what our bodies are telling us, and harness that extra boost of oomph to empower us rather than feel embarrassed or ashamed.

Getting our first period, the facilitators said, was  an initiation into our feminine power and an entering into the official tribe called Women. We talked about how so many women have forgotten or were never taught how to cultivate an intimate, empowered relationship with their menstrual blood.

I would go on to explore and deepen my connection to my own period when I joined a Moon Lodge in Venice, Ca. This was a modern day, real life version of the red tent where the women would gather in the bestselling novel of the same name by Anita Diamant.  Gathering once a month with the same group of women, together we honored the female bleeding time. (See my post, The Power of the Period).

That was several years ago.

Lately, I’m once again less than thrilled when I bleed— Damn period! My cycles have been heavier and more painful than they used to be and some days I just want to get in bed and stay there. It’s just my period not influenza, I tell myself, forcing myself out the door.

Sometimes my mind is even a little fuzzy and I forget the obvious. What’s the name of that hot guy again? The one who used to be on the TV show ER and has a mansion in Lake Cuomo? Having a period has started to feel like a curse, just as some ignorant person told me once when I was a girl.

At a recent get-together, a few of the older women who were there kept talking about how they were going through Perimenopause. Taking supplements… they said… I know a great holistic doctor.

What the what? Is that even a thing? How come I’ve never heard of it? Is that’s what is happening to me? When I Googled the word a number of articles popped up, including this one that describes some of the possible symptoms.

Perimenopause is the transition phase before menopause.

I, of course, knew menopause would be coming one day. But apparently, first, there will be perimenopause.

I’m not sure whether I’m “officially” in perimenopause. Unlike getting one’s first period or no longer bleeding ever again there are no absolute symptoms. (And I’m loathe to do my usual, look up symptoms on Google and assume I have whatever an article says I do.) There is a test a doctor can give to verify.

Still. Goddamnit, just one more thing! As much as I’m learning to embrace getting older, letting go of all that comes with being younger still feels like a loss some days.

I am also curious and excited. Just as there has been potency in having a period—and from what I’ve read, the surge of power coursing through a woman’s body is the strongest yet in menopause—surely, there also must be gifts to receive during perimenopause.

I can’t wait to find out.

47 Comments on “Between The Period and The Final Pause”

I want to know what you think! Cancel reply