The Other “F” Word

Three years ago I turned forty. I flipped out when it happened, even though I knew that the negative ideas about women hitting middle age are misogynistic and wrong.

Here are excerpts from my journal that I wrote in 2011 about this milestone age (Apparently I was watching a lot of Oprah back then):

Entering middle age for a woman can feel scary in a society that places so much value on youth. Girls and younger women are objectified. Older women are mocked or treated as if they are invisible. And if a woman tries to hold on to her youth for too long, she too risks being ridiculed. It seems to me that the only way for any woman to escape this contempt is by dying young.

Psychologists and former models Vivian Diller and Jill Muir-Sukenis are the authors of Face It: What Women Really Feel Like as Their Looks Change say, “While individually we were taught that beauty is only skin deep, our youth-obsessed culture reinforces the notion that beauty is our currency, our power, and what makes us female.”

They write that millions of women are “surprised, and embarrassed, even” to discover that they care so much about their changing looks. Even “the first wrinkle or gray hair can send us into an emotional tailspin.”

Reading their book, I thought, I’m not the only woman my age feeling this way? Why don’t more of us talk about this? It would definitely make me feel less alone, neurotic, and superficial. Now I understand why there are women who feel like they have to get Botox shots or go under the knife. We’re taught to despise ourselves for getting older yet we look down at each other for wanting to look younger.

At the Academy Awards this year, actress Kim Novak, 81, made a rare public appearance. Novak, who became a big star in her twenties, obviously doesn’t look like her younger self. But she does appear to have undergone some work.

The vitriol directed at her by men and women on social media for trying to look younger even though she is an old woman made me sick. I can only imagine how it made Novak feel. Then again, she probably would have gotten just as much heat if she’d walked onto the stage looking her age. I can see the headline now: Kim Novak, 81, actually looks 81!

About six months into being 40, I realized I had a choice to make. I could keep chastising myself for getting older, or I could stop buying into the messed up ideas around aging that I’d internalized. Considering that I’d spent most of my thirties waking up to who I really am and what I really want, I certainly didn’t want to fall asleep again under another sexist spell cast by the patriarchy.

At 41, I kicked my sugar habit and became the healthiest I’ve ever been. I also started writing my first book because I was finally ready. After 40 years of people pleasing, I stopped saying yes whenever I really mean no. I also stopped worrying about men who weren’t interested in me and started to pay attention to the men that I was interested in. Last year, I met the person that I want to grow old with. And even though I don’t look 23 anymore, or even 33, I love the way I look today at 43. 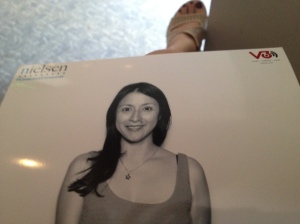 Still, I’d be lying if I said that I no longer panic whenever a new sign of aging makes an appearance. Just the other day I stressed out when I saw a gray hair fall out of my left eyebrow. I’d never even thought to worry about that body part.

I must say that so far my forties are proving to be—to use yet another F-word—(pretty damn) Fabulous.