← Freeing the Female Orgasm
Me & My Belly: A Love/Hate Story →

Walking in the Womb

For years I didn’t give much thought to my womb. I knew it was the place in my body where babies grow, but since I wasn’t sure I even wanted kids, any information about the womb was on a “need to know later” basis.

It didn’t help that I grew up in a culture that instilled in me the fear that my life would be ruined if I ever got pregnant at the wrong time or with the wrong guy. The word “illegitimate” is still considered a huge stigma in the Philippines and there is no divorce.

I didn’t realize that by distancing myself from my body’s ability to conceive, I was disconnecting from my innate creatrix nature. Because of this I struggled to carry even “creative” babies to term—books I wanted to write, scripts I wanted to perform, plans for new business. I felt unable (and afraid) to “birth” them into the world.

It wasn’t until I started studying The Tantric Dance of Feminine Power™ and my teacher told me to “drop in” to my womb that I even found out where this is in my body. Not only did it take multiple tries before I was actually able to “drop in” to my womb (definitely a learned skill that I will write about in a future post), but I had to Google the word “womb” and look at anatomical drawings online so I could pinpoint its exact location.

When I finally did “drop in,” it felt like reentering an important part of my body I’d disowned. I’ve been working on deepening the connection to my womb ever since.

So when Anita, a local healer I met while on a visit to Hilo, Hawaii last month offered to take me and a few other women on a private tour of the womb cave of  Pele, the Goddess of Fire, Lightning, and Volcanoes, I said yes. I was excited for the opportunity to physically enter a  “uterus.” Our expedition took place on our last day in Hawaii.

There are five of us. We have spent the last ten days attending a retreat for artists, healers, and teachers. At a fire ceremony the night before, each of us threw into the flames paper on which we’d written down what we were ready to release in our lives. Pele is also known as the Goddess of Destruction, Creation, and Rebirth. Legend says she will give you what you wish for and “destroy” what you no longer want.

Huge rocks are the steps that we take down into the cave. When we reach the ground, several feet down, we are inside a wide lava tube. This is a nature-made tunnel through which molten rock used to flow. The air feels moist.

All around us there are hardened lava formations—some of them seem to glimmer silver under the glow of our flashlights. The way ahead is clear, as if nature intentionally paved a path between these igneous structures just for us. The tunnel takes us deeper, another twenty feet below the ground, until we see this: 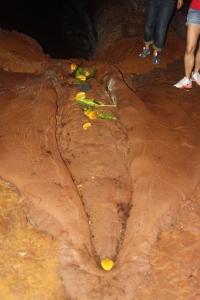 In front of us is a giant female vulva made from lava rock. It even has a labia and a clitoris. Someone has left flowers on its clitoral hood.

“Offerings,” says Anita, “Couples and women come here to ask Pele to help them get pregnant.”

I bend down and feel the rock. It is cool and smooth but underneath the surface I can feel a thrumming, almost as if the vulva is pulsating with energy.

No one says anything for minutes.  All of us, as if pulled by a giant magnet, have gathered around it.

A few years ago, I would have been terrified to even enter a place like this. I would have worried that just breathing the air would make me extra fertile. Now, there is so much that I want to create, to grow, to birth into the world. I want—I need—to be that fecund. We lay our offerings of flowers and fruit and I close my eyes.

My mother says that I  refused to come out when she was pregnant with me. So she went to church, leaving flowers below the statue of the Virgin Mary and asked her for help. My mom went into labor a few hours later.

“We’ve got to keep going, ladies!” Anita, who is keeping track of time for us, gets up.

We follow her, careful to walk around a deep opening right in front of the vulva—Pele’s womb!—so we don’t fall in.

There are steps on the other side—a bunch of sharp rocks that happened to serendipitously pile themselves into a semi-orderly downward stack.  Only my friend Marya and I are wearing sneakers so we are the ones to climb down.

When we get to the bottom, we flash our lights at the tall “uterine” walls surrounding us. Their “inner lining” is made of red and black hardened rock—the remains from the last time Pele “menstruated” lava.

Marya and I notice another opening at the other end of this cave. We forge ahead.

To enter, we have to bend down and climb through the hole. On the other side is another lava tube that turns into a long passageway that will surely drop us deeper into the underbelly of the earth.

It is still and silent in this inner cavern. It’s the kind of quiet that you experience inside an empty church.

Getting rained on inside Pele’s womb

As a child I used to pray to God to show himself to me, just so I could be certain that he was real. (Part of me was scared that if he ever did make an appearance this would either mean I had gone crazy or died.)

I can now tell you that I know for sure God does exists because I have seen Her. And her body, like all female bodies—like my body—is a creative force of nature.

“Are you ready?” Anita has come down to get us. It’s time to leave the womb and step out into the world.

*** All photos by Christina Richards

What are you ready to create in your life? Are there any limiting beliefs or ideas that you need to let go of to make this happen?

22 Comments on “Walking in the Womb”